Thank you to Team Foster for purchasing ADN-Northeasts first 7×16 enclosed trailer that is desperately needed to provide mobile clinics to the community. With the help of Team Foster and the new trailer we will be able to double the number of clinics we offer and be able to provide clinics in multiple states at the same time.

Thank you to VNA Foundation of North Penn.  ADNNEC and Chase your Dreams will be working together to provide the North Penn School district with Chase your Dreams books Chase-man: How My Brother Became a Real Superhero,  and The Blueprint of a Little Superhero – ChaseMan. You may have heard his name, now hear his story… This is an inspirational story of one extraordinary boy who was presented with an exceptional challenge. With the support of his big brother, he overcomes several obstacles and against all odds becomes a real life superhero.

In 2017 I was voted as the Alternate on United States Olympic Committee Athlete Advisory Council for  Canoe/Kayak. On July 30th, 2018 Brandon Holiday, the Executive Director of Athletes with disAbilities Network Northeast was selected for Team USA Leadership Certificate Program; otherwise known as the “Kellogg Program” The TULCP VI 2018-2019 cohort! This incredible leadership journey, facilitated in partnership with the Kellogg School at Northwestern University, This program will provide Brandon an opportunity to grow as an executive director organizing Paralympic sports, as an athlete and allows him to expand the ability to network with more communities, educate, and impact them about with the U.S. Olympic/Paralympic Movement.

Each year more than 500 novice and experienced athletes meet for a week of archery, swimming, weightlifting, basketball, quad rugby and more. At the National Veterans Wheelchair Games, the largest annual wheelchair sports competition of its kind in the world. Throughout the week, veterans realize their abilities and potential while enjoying the spirit of healthy activity and fellowship.

August 2018, 7 veterans from out Philadelphia area traveled to Orlando Florida to attend and compete in the National Wheelchair Games. 4 of these athletes are members of Athlete with disAbilities Network Northeast, which trains out of the Sweat Fitness Gyms, where adaptive fitness clinic are held.

Athletes competed in Boccia, bowling, pool, air rifle, archery, swimming, and cycling.  Team member Jimmy Homer won a Silver medal in Paralympic Boccia ball and a Gold Medal in bowling.  Ralph Jones won a Gold Medal in bowling.  Greg Jack won a Gold medal in Softball, and Sonny Wimberly won a Bronze medal in Trap Shooting, Silver medal in Softball, and Bronze Medal in Hand Cycling.  These outstanding athletes embody the characteristics and positive outlook we all should have after facing a life-changing event.  They lead by example exemplifying that “There is no Replacement for the Competitive Spirit”

(Click on photo to go to the photo gallery) 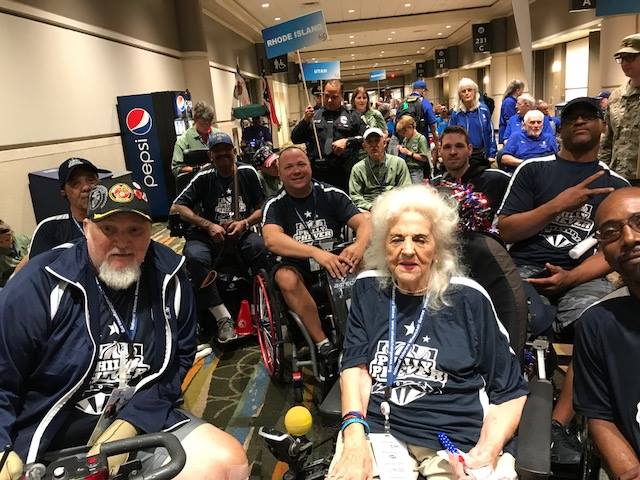